A few days ago, AnTuTu announced the list of most powerful Android smartphones for March 2022. Qualcomm’s new Snapdragon 8 Gen 1 still occupies as many as eight seats in the TOP10. However, the competing product, Dimensity 9000 has only two smartphones and both devices are on the list. The Redmi K50 Pro claims the fourth position while the Oppo Find X5 Pro claims the sixth position. These are the only two non-Snapdragon smartphones on the list. This is the first time that other manufacturers have directly challenged the Snapdragon contemporary flagship chips. The current Dimensity 8000 series sub-flagship chips have a very strong reputation. The balance between power consumption and performance is very good. However, the Apple iOS camp is not so lively. 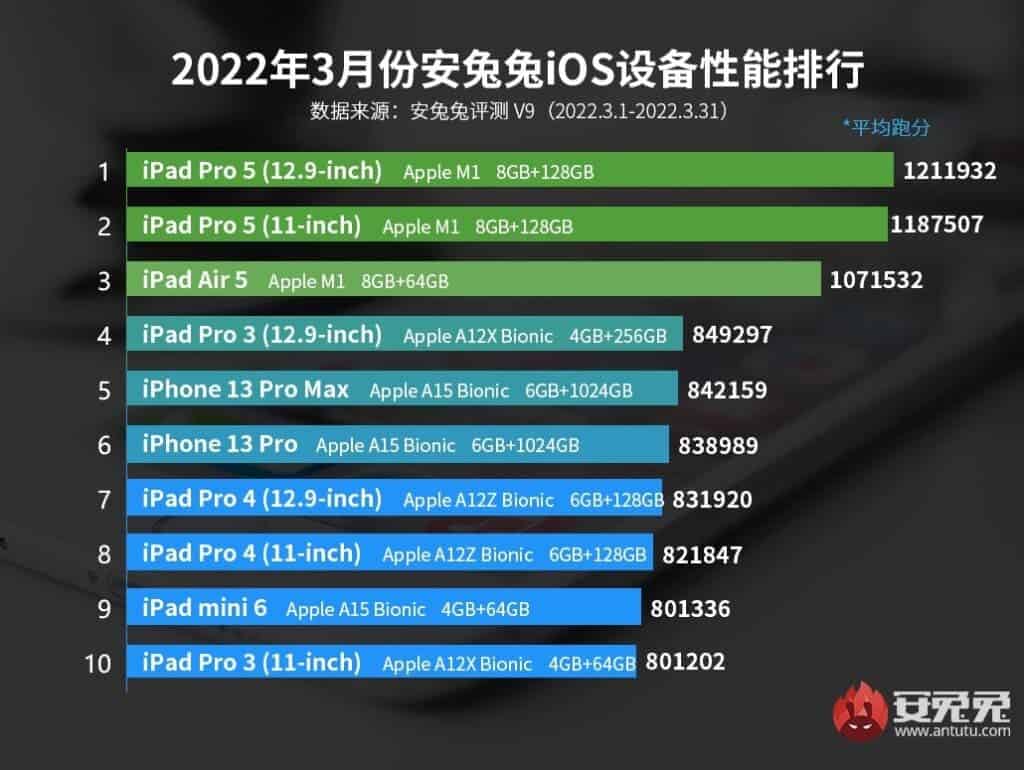 A few days ago, AnTuTu has officially announced the iOS device performance rankings for March 2022. Among them, the iPad with the M1 chip is completely slaughtered, and the newly added iPad Air5 ranks fifth with a score of 1.07 million. This is also the first time that a chip exceeds a million on AnTuTu.

At present, the M1 chip is undoubtedly the strongest on the surface of the mobile terminal. Compared with Qualcomm, MediaTek, etc., it has a complete crushing performance. However, this chip only appears on tablets for now.

In addition to the M1 chip, the most eye-catching on the Apple iOS performance list is the A12X chip of four years ago. This processor is on the third-generation iPad Pro (iPad Pro 2018), which was officially unveiled at the autumn conference in 2018. It is still the strongest performing chip of the A-series. It is even stronger than the A15 of the iPhone 13 Pro Max.