Elon Musk and its Space Exploration Technologies Corporation (SpaceX) have set a high bar for any activity they do. This is also true for the satellite internet service namely Starlink. Today, we learned that the latter has achieved yet another outstanding download speed in the United States.

As you know, Starlink is a low Earth orbit small satellite internet constellation. It has a goal of providing internet access to everybody regardless of the area they live in. prior to this, various speed test results showed that Starlink surpasses broadband download speeds in most countries. As for the latest test results, it achieved 301 Mbps in download. Thus, we are talking about one of the fastest internet services globally. However, there is still room for improvement and it refers basically to the latency. Also, the upload speed still needs improvements.

Earlier today, a Reddit user shared the internet speed test result. The screenshot published by DullKn1fe shows that Starlink can reach an eye-popping download speed of 301 Mbps. From the comments, we can learn that the user lives in rural Wisconsin, located in the Northeastern segment of the continental United States. 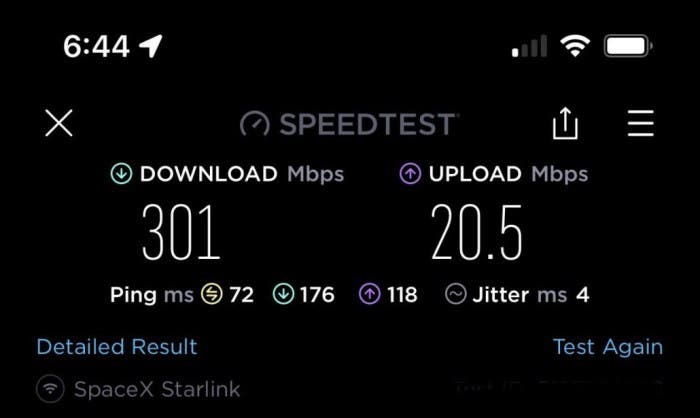 Unfortunately, as mentioned above, the download speed and the latency are not impressive. For instance, the user could get a download speed of 20.5 Mbps and 78 milliseconds (ms) in latency.

What’s more important this is not a stable network speed. We mean, in March we learned that Starlink internet speed has fluctuations. For instance, in the mentioned month, the highest download speed was 299 Mbps (Grass Valley California). Whereas, there were some disappointing results as well, 1.23 Mbps.

However, the quarter-over-quarter comparison shows that the range between the highest and lowest download speeds increased by 30 Mbps or 30% over Q3’s 100 Mbps. But the average download speed was improved by 10% only.