We’re getting close to August which happens to be the most probably release month for Samsung’s next foldable smartphones. The Galaxy Note series is gone and buried, but the second Galaxy Unpacked event of the year, will serve to disclose the new generation of foldable smartphones. Samsung is doing really well with its foldable devices and expects this year’s Galaxy Z Fold 4 and Galaxy Z Flip 4 to overcome their predecessors in terms of sales. As we’re allegedly getting close to the release date, more and more leaks are popping out. Today, the well-reputed Ross Young, from Digital Supply Chain Consultants (DSCC) has revealed what color options the Galaxy Z Flip 4 and Bespoke Edition will have. 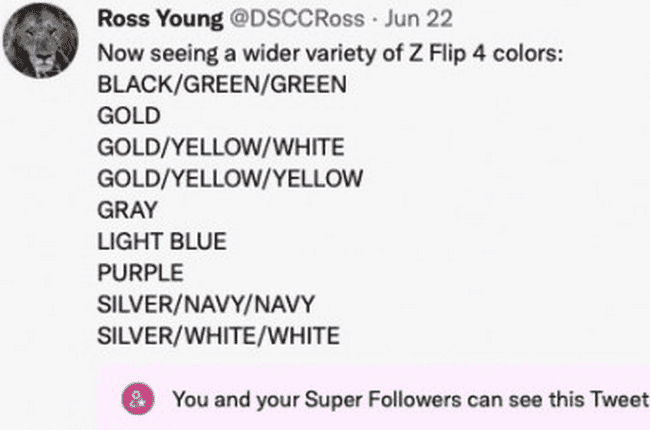 There will be many more color customization options. More than that, Samsung is also expanding the availability of the program. For now, it is only sold in Australia, Canada, France, Germany, South Korea, the US, and the UK. However, the company is aiming to launch it in more European and Asian markets. However, the list of new countries remains a mystery for now.

According to reports, the Galaxy Z Flip 4 will bring the Qualcomm Snapdragon 8+ Gen 1 SoC and will have a bigger battery. The device will come alongside the Galaxy Z Fold 4. The device may still be one of the best offerings in the clamshell foldable segment. After all, the Motorola RAZR 3 is said to come with a small battery.