A Realme GT Neo 3T support page is now live on the Realme India website. The smartphone’s launch in the country could be around the corner. Realme launched the GT Neo 3T and GT Neo 3 globally on June 7. The phone is reportedly a rebranded version of the Realme Q5 Pro. Notably, the GT Neo 3T seems to draw inspiration from the Q5 Pro for its design. Also, it boasts the same specs the Realme Q5 Pro has to offer.

Noted leaker Mukul Sharma spotted the Realme GT Neo 3T listing. Also, he found the phone’s listing in an unexpected place. Interestingly, the phone was listed under the price list of spare parts on Realme’s website. Notably, the 80W charging adapter is mentioned in the list with a steep price tag of INR 2250. In fact, it is the costliest part on the price list. Likewise, the front camera sensor is listed for INR 890. As per a report by 91mobiles, the Realme GT Neo 3T price in India could be between INR 30,000 and 40,000.

The Realme GT Neo 3T sports a 6.62-inch E4 AMOLED display. Further, this screen delivers a 120Hz refresh rate. The display also supports HDR10+ and offers 1300 nits peak brightness. The phone adopts an eye-catching checkered flag design. This design is available with the Yellow and White color model. However, the Black color model has a matte finish. Under the hood, the phone packs a Qualcomm Snapdragon 870 chipset. Moreover, this chip has one prime core that runs at 3.19Ghz.

The SD 870 has three cores that run at 2.42GHz. Also, the processor comes with four efficiency cores that run at 1.8GHz. Further, the GT Neo 3T gets an Adreno 650 GPU for graphics. The phone ships with 8GB of RAM and offers up to 256GB of onboard storage. For optics, the GT Neo 3T features three rear-mounted cameras. Notably, it has a 64MP primary sensor on the back. Moreover, it houses an 8MP ultra-wide camera. There’s a 2MP macro sensor as well. 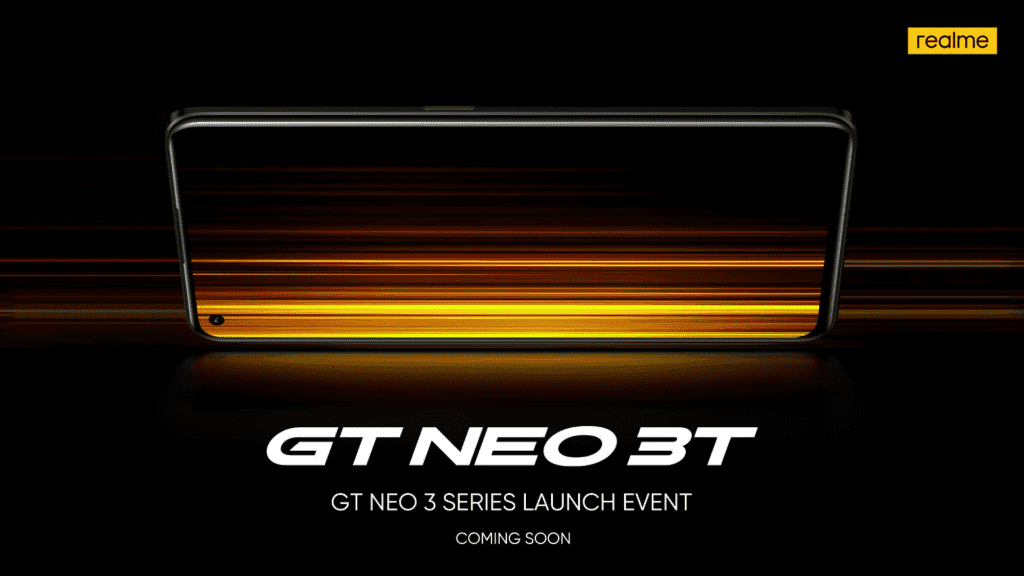 Upfront, the Realme GT Neo 3T has a 16MP shooter for selfies and video calls. Moreover, a 5,000mAh battery unit powers up the entire system. This cell supports 80W fast charging. Further, the phone runs Android 12 with Realme UI 3.0 on top. The phone even supports Virtual RAM of up to 5GB. It has VC cooling, dual-band Wi-Fi, and Bluetooth 5.2. Lastly, the phone weighs 195 grams and is 8.65mm thick.