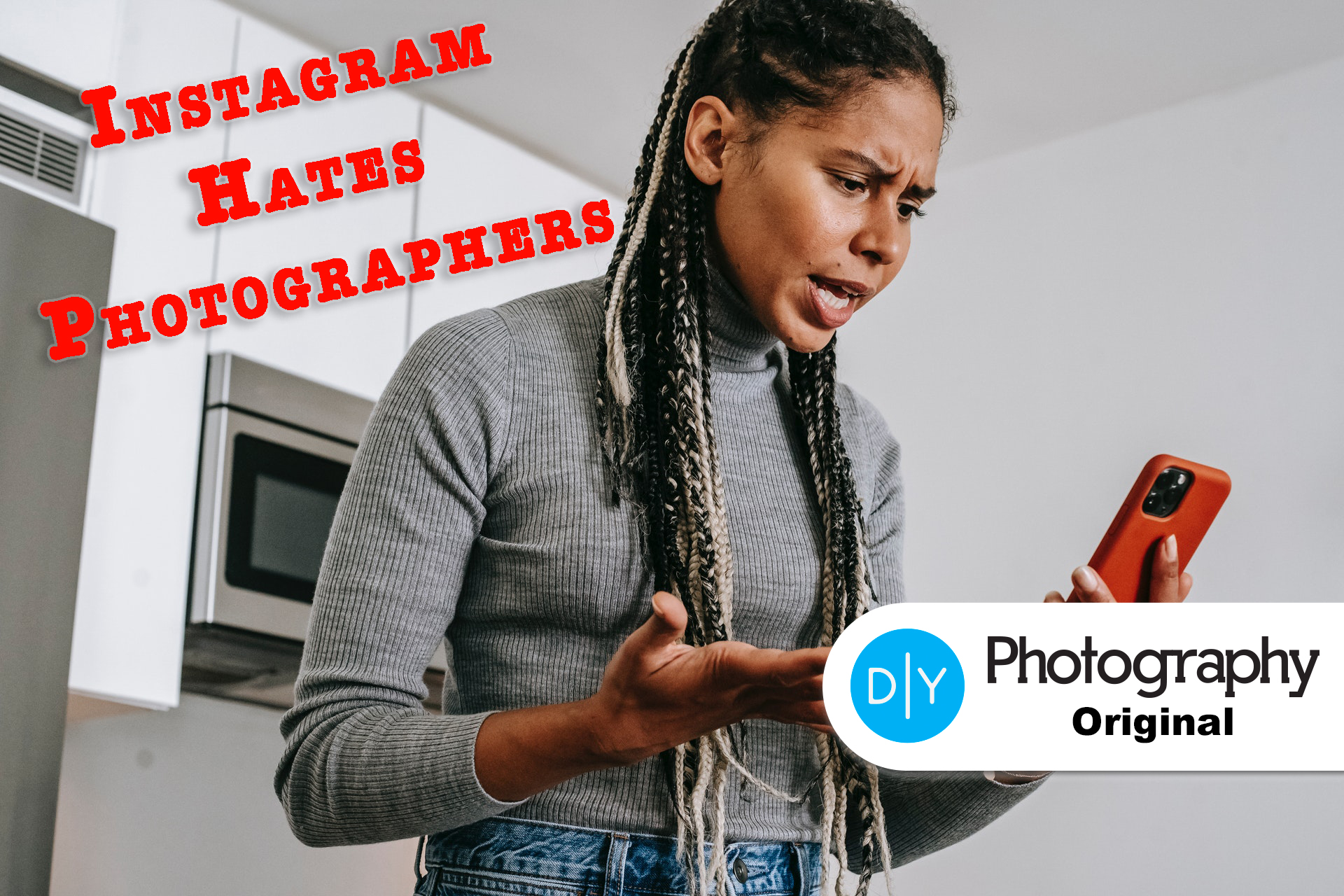 The metaverse is a strange place. The outward visage of the social media giant is that it’s a place where people can express their views and their creativity. The truth of the matter is that it’s all a front for ad revenue. I know, it’s hardly a surprise, but in the interest of revenue, this gargantuan brand has declared war on photographers in the interest of cash flow.

Instagram is getting away from photo in favor of video

Instagram was launched in 2010 by Kevin Systrom and Mike Krieger as a photo-centric social media app. The name is a mash-up of the terms ‘instant camera’ and ‘telegram’, giving us the clear indication that it’s all about showing still images. Major changes have been made in the evolution of the app including the addition of captions and comments, which never existed in the first iteration of the service. Since the acquisition of Instagram by Facebook in 2012 for $1bn the changes have caused an uproar on several occasions. The photo-sharing app has moved farther and farther away from still images with each update.

It’s clear to see that video is the priority for Instagram, with video posts consistently outperforming photo posts. The aspect ratio format for a post on Instagram is currently 4 x 5 (which we should make the most of to fill as much of the screen as possible to grab people’s attention) but in a recent post it was revealed that it’s looking like the future of the Instagram feed is 9 x 16. I see this as another stab at photographers which will make things even more difficult than they already are. The 9 x 16 format will fill screens, with most smartphones utilizing this format, but this is far from the native aspect ratio of a camera.

Instagram Reels is clearly a method of competing with TikTok, allowing users to share videos on the go. This is the latest in a series of changes made to the platform that prioritizes video over photos. There was once a sneaky trick that was promoted by photographers, suggesting that if we make a photo into a video format it would gain more traction. Since that happened a few years ago there’s a constant surge of ideas designed to ‘beat the algorithm’, but what is this algorithm thing?

In short, the algorithm is a machine designed to make money through ad revenue. It works by learning about what users like so it can show them more of it, placing ads in between the posts. This happens because this is the way social media platforms generate revenue – through ads. There’s no paid subscription model, rather it’s a constant stream of pennies and fractions of pennies that come in from showing ads to users that flows stronger than the Nile when combined, turning over unfathomable quantities of cash owing to the sheer number of users – roughly one billion monthly active users on Instagram.

The algorithm is an AI tool and at this stage, it requires minimum human intervention. It’s learning what we like so that it knows what to show us, but also what ‘community’ we fit into so it can determine what to show other users of our content. Instagram keeps the workings of the algorithm a closely guarded secret, but there are plenty of people out there (including myself) who are looking for patterns and trying to understand how the algorithm really works. Here’s the general consensus:

We now have several factors at play. Firstly, the algorithm is determining who to show our post to based on past experiences including who enjoys our content, who follows us, what’s trending, what the content of the post is, who interacts with our posts, who we interact with

Instagram will show our post to a fraction of our followers and test the level of engagement it generates. This is known as the golden hour because it’s in this testing time that the algorithm will determine whether to show our post to more people, or whether to throttle it and have it buried in the depths of Instagram, never to be seen again except in our own profile feed. If we pass this test we move on to…

The algorithm has noticed that there is decent engagement among our followers, so now it pushes the post father. It will now expose our post to more of our own followers, as well as to a wider audience of users who follow hashtags we’ve used or similar accounts. This is why we see ‘because you follow’ posts in our feed. If this doesn’t return a good level of engagement, the post is killed. If it works and the engagement continues, we move on…

We will continue to have our well-performing post shown to followers and non-followers until the algorithm decides it’s no longer worth it due to capped engagement or the emergence of something better.

In a nutshell, this is what’s happening when we post on Instagram. One factor that is important to our growth is engagement. We can’t expect to receive engagement out of nowhere – it’s important to remember that engagement breeds engagement, and we should give what we want to take. If we engage with other posts by leaving meaningful comments regularly we’ll increase our chances of receiving engagement because we’re showing the algorithm that we are an active user, and we’re exposing ourself to other users.

The most engaging media on Instagram is video, with Reels becoming a priority for the platform in their quest to compete with TikTok, and it’s causing an originally photo-centric platform to be far from what it was intended to be. It’s increasingly difficult for photographers to show still images and generate engagement.

I’ve seen friends expressing their hatred of the direction Instagram has gone in. I did my own little bit of research on my Instagram Story and asked my followers whether they would rather see photos or videos in their feed. The overwhelming majority voted for photos, however, the truth of the matter is that people vote with their feet, so to speak, and we almost all binge-watch the videos that pop up in our feeds. We have a (bad) habit of moving from one to the next until, before we know it, it’s tomorrow already! Are we our own worst enemy?

The latest Instagram rumor is for the 9×16 format to become more prominent for a full-screen experience on mobile. This doesn’t align with what we create as photographers at all. And with that, I rest my case. It’s already difficult enough to keep up with the changes on Instagram and it seems to get trickier by the day. Instagram clearly hates photographers.

Do you prefer photos or videos on your Instagram feed?

Everything Revealed at Future Games Show 2022