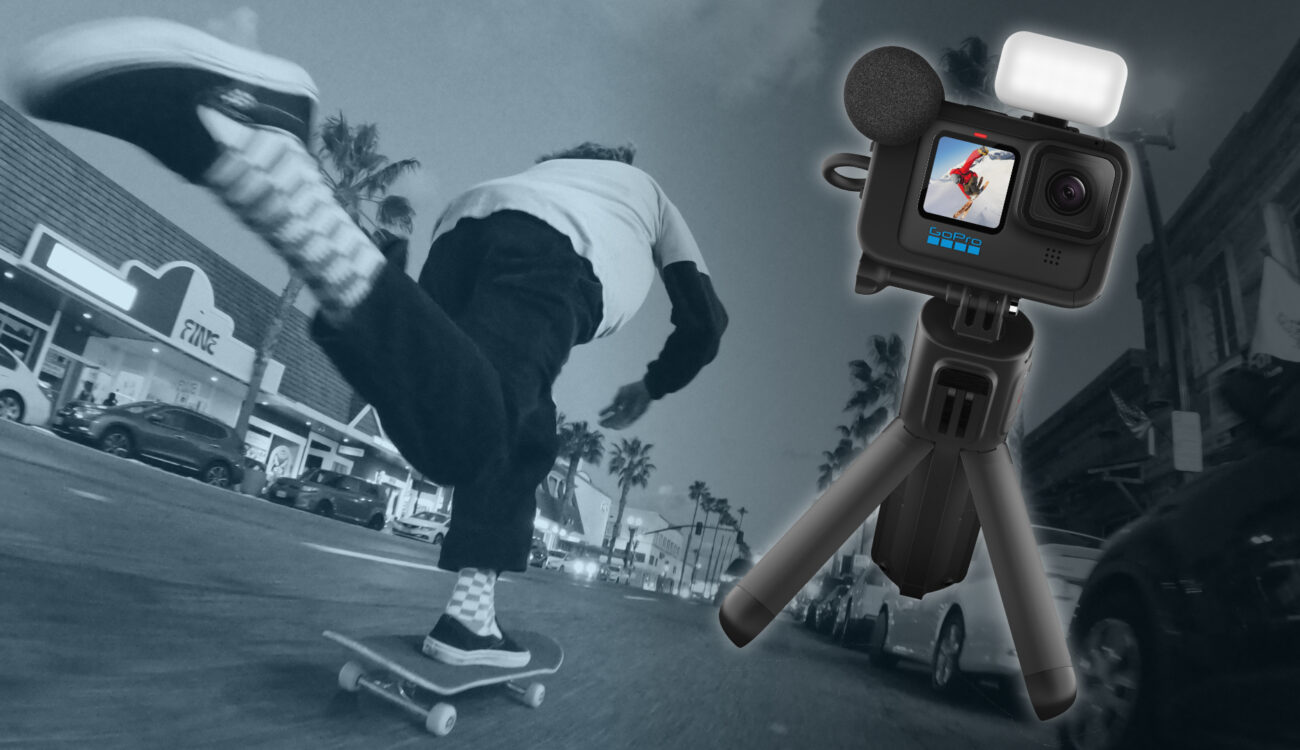 The GoPro HERO10 Black has been out in the wild for a while now, capturing all kinds of crazy outdoor sports, surfing, or vlogging. The company has now released yet another bundle for those who want everything they need to get started in one go: The GoPro HERO10 Black Creator Edition includes the camera, an extra battery, a 32GB SD card, a newly released Volta Battery Grip, a Media Mod and a Light Mod – all in one box.

Filming with an action camera should be fun. It shouldn’t be complicated to set up, it should just work. And most of the time GoPro has delivered on those requirements, but sometimes you just need a little bit more of everything. Maybe a light for low light conditions, a handy tripod to set up the camera hands-free, or just an extra battery for longer sessions.

GoPro seems to want to leverage the gap between the release of the latest generation of HERO-labeled action cams (we’re on number 10 right now) and the 11th generation sometime in the future to release an all-in-one package for all the creators out there. Check our review here!

This so-called Creator Edition contains everything you need to get started. And fast. Of course, the tried-and-tested GoPro HERO10 Black is included. In addition, you’ll find a Volta Battery Grip, which not only supplies your GoPro with juice for a few additional hours, but also functions as a tripod and handle at the same time. It can also be used to control the basic functions of the HERO10.

The Volta battery grip can also be completely detached without losing the ability to remotely control the HERO10 from a distance of up to 30 meters (98 ft), which can be very handy for the shot at hand. According to GoPro, the Volta grip gives you over 4 hours of 5.3K recording at 30 fps thanks to its built-in 4900 mAh battery. And of course it, just like the GoPro itself, is “fit for rain and snow conditions” (from Press Release). However, GoPro also issues a warning on its website, as the Media Mod and Light Mod are a bit more sensitive to severe weather conditions:

HERO10 Black Creator Edition (HERO10 Black camera when used with Volta, Media Mod and Light Mod) is not weather resistant or waterproof. Using the complete system in rain, snow or under water will damage your camera and void the warranty.

Also in the box is an extra (non-enduro) battery, a 32GB SD card, the Media Mod cage, and a Light Mod, which is basically a small LED light that can be attached to the top of the camera.

The Media Mod includes a built-in directional mic (audio in front of the camera or behind it can be prioritized), 2 cold-shoe mounts, a 3.5mm mic port for additional microphones, and an HDMI-out port.

With all of these accessories in your bag, you should be able to use the GoPro HERO10 in every way imaginable while still maintaining a fairly compact design.

GoPro wants you to sign up to their GoPro Subscription program, which is $49.99 / year and offers you discounts on new gear, unlimited cloud backup and a no-questions-asked camera replacement service. Check their website for details.

Finally, here’s a fun fact: GoPro celebrates its 20th anniversary in 2022! Personally, I still have an original GoPro HD HERO (from 2010) lying around somewhere… time flies, doesn’t it?

What do you think of it? Is this a worthwhile bundle to get started with the GoPro HERO10 Black? Share your experience in the comments below!