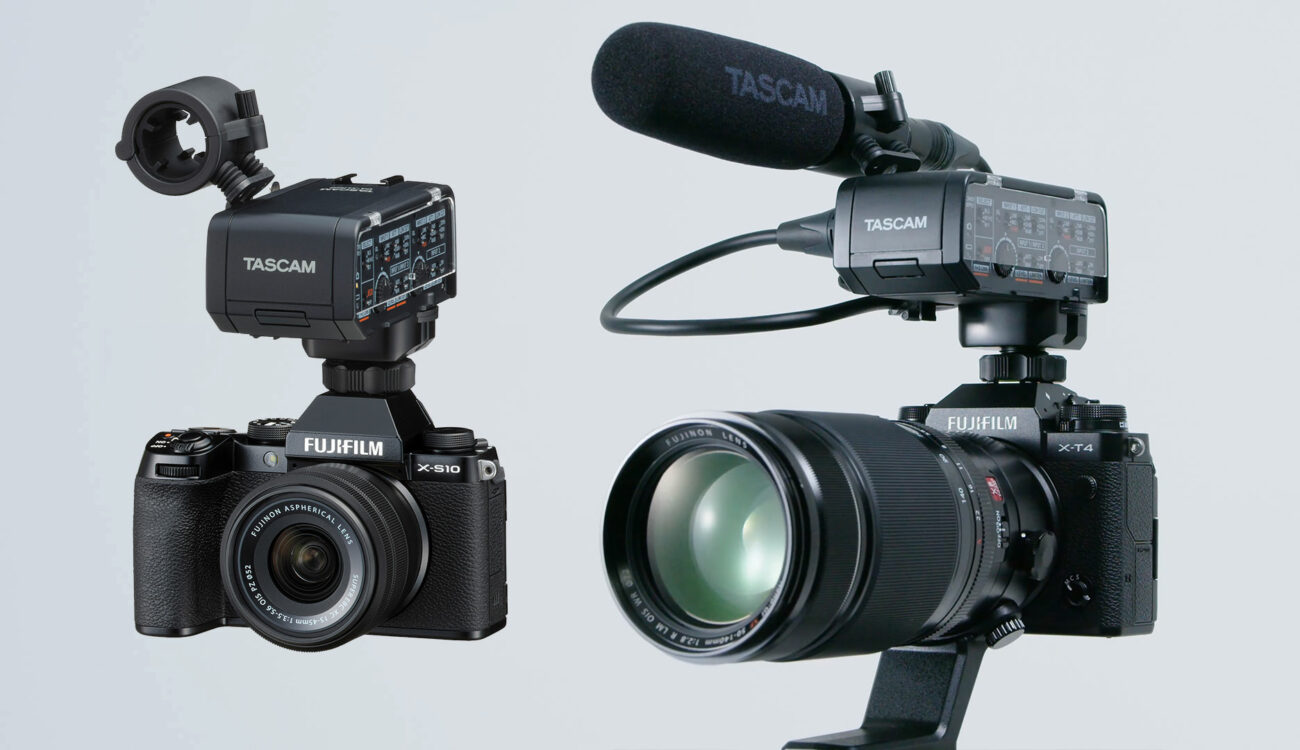 First announced in August 2021, the XLR audio adapter TASCAM CA-XLR2d from the Japanese TEAC Corporation became available for pre-order in January 2022. As I have been using the Panasonic XLR adapter with my LUMIX cameras for years already, I am very happy to see other mirrorless cameras also get the option to have a better audio workflow. Especially Canon and FUJIFILM cameras will profit from the TASCAM adapter as it offers a digital connection via the cameras’ hot shoes.

The TASCAM XLR audio adapter adds two XLR inputs with 48V Phantom power, lots of manual controls, an extra 3.5mm input, and 3.5mm headphones output. It also includes a detachable dampened microphone bracket on the side, and it is powered directly from the camera’s hot shoe.

The TASCAM CA-XLRd-F is the FUJIFILM version of the adapter. Recently, the two existing FUJIFILM cameras that were supposed to support the TASCAM CA-XLR2d-F audio adapter – the X-T4 and X-S10 – finally received the firmware updates that enable it.

Announced already more than two years ago, The FUJIFILM X-T4 still holds the flagship spot in the FUJIFILM X-mount lineup. This will stay so at least until this year’s X Summit event in May where FUJIFILM plans to announce multiple new cameras. You can check Johnnie’s X-T4 review from February 2020 in case you missed it. I think this camera is still very relevant in 2022, especially given its price. The new firmware update version 1.40 adds the following new features and improvements:

The new firmware update for the X-T4 can now be downloaded directly from the FUJIFILM support website.

The tiny FUJIFILM X-S10 camera has been announced in October 2020 and despite having a small footprint, it still offers IBIS and other useful features. Make sure to check Johnnie’s X-S10 review in case you missed it. Although the TASCAM XLR adapter might be a bit too large for such a small camera, it is still great to see that it will now be supported. The full list of new features and improvements included in the firmware update version 2.30 looks like this:

The new firmware update for the X-S10 can now be downloaded directly from the FUJIFILM support website.

The TASCAM CA-XLR2d-F audio adapter for FUJIFILM can currently be pre-ordered for $499. According to B&H, however, it seems that it won’t start shipping before the end of October 2022. Both FUJIFILM cameras have been available for purchase for a while now. The X-T4 currently sells for $1,699 and the X-S10 can be purchased new for $999.

Do you use one of the mentioned FUJIFILM cameras for your video work? Are you planning on getting the TASCAM audio adapter? Let us know in the comments section underneath the article.

One SIM to rule them all: eSIM to support dual network on Android 13