A great gigabit router for those on a budget

Things to consider when purchasing a gigabit router

Everyone out there who spends a considerable time of their day online wants faster internet. A good Gigabit router can help in providing you with reliable and speedy internet access. The real struggle is getting through all of the technical specs and jargon and understanding how all that makes your internet experience better.

Here are some things to look out for:

Compatibility between the type of router you buy and your internet service provider’s service is highly important. Most ISPs will give you a modem and router and set up the Wi-Fi by themselves within your home. Usually, the modem and the router are combined into a single device.

Some routers may struggle with different ISP services, so you check with your internet company beforehand.

With the dozens of options out there, there are bound to be different routers and Wi-Fi systems on the market. Here are some of the obvious ones:

A single router needs to plug into your modem via an Ethernet cable. While this restricts where you can place the router, you can manage a larger distance with clever cable management and a longer cable. Of course, the Wi-Fi signal will be strongest near the router and drop off as you move further away.

Many single routers can solve this problem thanks to a better range. This is done by using multiple external antennas.

What are Mesh Systems?

Mesh systems have recently started gaining popularity, such as Google’s Nest Wi-Fi system. Mesh Wi-FI is the answer to coverage woes. This type of system uses a central hub as the main router, and different access points scattered across the house or building.

You can achieve wider coverage this way, as any device you use will connect to the nearest node by default. Downsides include cost and the often unintuitive setup process.

How fast are gigabit routers?

First, let’s differentiate between Megabytes/second and Megabits/second. Megabits/second is the industry standard used to denote the speed of the internet connection and the router. 100 Megabits is equal to 12.5 megabytes.

So, if you buy a Gigabit router (1000 Megabits/s), then that is going to give you a maximum download speed of 125 Megabytes/second. If you do have a Gigabit connection, then that’s great. Of course, remember that this is the theoretical maximum. Due to interference, obstacles, and thick walls, this speed can be much lower.

Now, you know the basics of what to look for when shopping for the best Gigabit router. Still, there are a few technical specs that we have not talked about yet. Let’s have a quick look.

Wi-FI standards are usually represented as “802.11 ac” or something similar. What does this mean? Well, the body that sets these Wi-Fi standards says that the number “802” represents computer networks, while the “.11” part is for Wi-Fi or Wireless Local Lan (WLAN).

Quite confusing, we know. For the bare minimum you want to buy an 802.11ac router, but going with a Wi-Fi 6 or 802.11ax router will be much better for futureproofing.

Wi-Fi comes in the form of different protocols. These protocols support different bands and frequencies. Most routers will support 2.4GHz and 5GHz Wi-Fi. A dual-band router can support both bands at the same time.

Look out for ports

Apart from your phone, PC, tablet, or other portable devices, you are much better off using a wired ethernet connection. This is beneficial for desktop PCs, consoles, server racks, and more. A hardwired connection is always going to be more stable and will provide better speeds.

Most single routers these days will have at least two or three Ethernet ports. However, this is less of an issue, as if you need more Ethernet ports, you can always get an Ethernet switch. 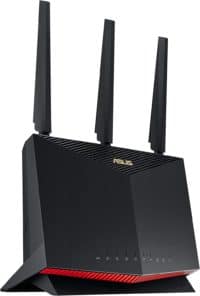 If you are someone who does a lot of competitive gaming, has a large house, and blazing fast internet, then the ASUS AX5700 is what you are looking for. This router is great for those tech-savvy people that are looking for a truly upgraded internet experience.

Now, this is a high-end router, and of course, that means it is quite expensive. However, if you have a lot of people in the house and can’t get a wire to every room, then a high-end router is your only option.

The ASUS AX5700 supports a Wireless ax or Wi-Fi 6 connection. You also get support for 160MHz channels, making this one of the few to have that feature. This means you can configure a very high-end home setup with this, with multiple clients that can stream 1700Mbps over the air to one client.

Now, that’s a bit advanced for the average user, so let’s dial it back a bit. With Wi-Fi 6, this router can easily support speeds well over 1000Mbps. As the name implies, it can reach 5700Mbps, but that’s unlikely in a home setup with interferences and a lot of devices connected.

Apart from that, this router looks quite good as well. It does not have that usual flashy design of most gaming routers, yet still manages to look a bit futuristic.

All in all, this is the best router out there for gamers and people who want high-speed internet. 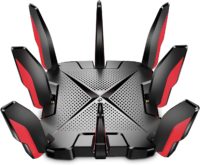 The TP-Link AX6600 comes in both gaming and regular versions. The differences between the mainly come down to design and a few extra features on the gaming version. This is one of the most advanced routers out there, and compared to Netgear’s devices, it’s priced reasonably as well.

Tri-band routers tend to be quite expensive. While this one certainly is not cheap, it’s still more affordable than the majority of options out there. In terms of speed, this router maxes out at 4.8Gbps. The Tri-Band channels mean that it is two 5GHz bands and one 2.4GHz band.

It has a few features built-in such as optimized game streaming, and stuff like TP-Link Homecare, antivirus, and parental controls. While these features are great on paper, they are not all that useful and feel more like gimmicks.

The real highlight lies in the performance. Signal integrity is great with this router. It also has expansive coverage thanks to the eight external antennas. It also supports MU-MIMO, meaning connecting more devices to the router won’t affect the speed too much.

To sum it up, if you’re looking for a reliable Tri-Band router, this is the gigabit router we recommend.

The past two Gigabit routers we looked at have a lot of high-end features. So, let’s switch gears from that a little bit. Not everyone needs a dozen or so features that they are never going to use, instead, a simple Gigabit router is what people usually want.

This is where the TP-Link Archer AX50 comes in. There’s not a lot to this device, but it gets the job done and does so reliably. This Dual-Band router supports speeds of up to 3Gbps. Realistically, your internet will probably not reach those speeds, but it is good to have the extra headroom.

The design here is understated, and it’s the type of router that you can easily hide. That’s why we appreciate the slim design so much. It has four antennas on the back that can be positioned to your liking.

Apart from that, it includes four Gigabit Ethernet ports and a USB 3.0 port for hooking up external storage on the cloud. It lacks a few features like app control and all that, but it more than makes up for that with its performance.

Overall coverage is great, and signal integrity is quite good as well. There are even cheaper dual-band routers out there, but we think this is the best gigabit router for value. 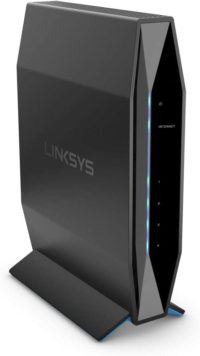 Like the TP-Link router above, the Linksys E8450 looks quite unassuming at first sight. However, don’t let the appearance fool you. This is a high-performance dual-band router that performs admirably for its price.

The immediate thing that jumps out is the appearance of the router itself. It looks less like a router and more like a gaming console that is placed vertically. It features subtle blue lighting on the front and on the stand itself.

It can easily support up to 25 devices or more, and the max speed tops out at 3.2Gbps. The lack of antennas might make you think that coverage is bad, but it can cover a 2500 sq. ft house without much issue.

Setting up and managing the router is also quite intuitive, thanks to the browser-based setup process. Like most routers, it also features parental controls and dual-band streaming. Other routers can be a bit finicky with the latter, but it works great here.

That’s what’s great about this Linksys router. The brand has been around for a long-time, and you can rest assured that reliability will not be a concern.

For the price, this is one of the best Gigabit routers out there. 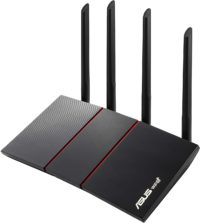 If you’re looking for an extremely cheap dual-band Wi-Fi 6 router, there are not many out there that we recommend. We’re glad then that the ASUS AX1800 exists. This is by far the most basic Gigabit router on this list, but for the money, it’s great for most people.

While this router is certainly cheap, that does not mean it leaves any performance behind. Thanks to Wi-Fi 6 it features MU-MIMO and OFDMA technology which results in better performance, efficiency, and overall throughput.

It looks quite decent as well, and it’s not one of that routers that look ugly when placed inside of your living room. You get 4 Gigabit LAN ports and of course, a WAN port to connect to your modem.

App setup is also quite easy, and the speed tops out at 1800Mbps. While that’s the lowest on this list, it is still quite fast for a Gigabit router. Most people won’t notice the difference.

It does lack a few gaming features seen on other routers, and a USB port would have been a welcome addition. The real downside, however, is the fact that coverage leaves a bit to be desired, especially if you have a larger house.

What router can handle 1000Mbps?

Any Gigabit router will be easily able to handle a 1000Mbps connection. However, to have some headroom, you want a gigabit router with a rated speed of 1200-1500Mbps or higher.

Do you need a special router for Gigabit Internet?

To use the full extent of your Gigabit Internet connection, you’ll need to buy a Gigabit router. These types of routers can support speeds of over 1000Mbps and beyond.

By using a 5GHz network, you can get speeds of up to 600Mbps on a Wi-Fi connection. Unfortunately, getting 1Gbps speeds on Wi-Fi is not possible right now.

Gigabit Ethernet certainly is not overkill if you can find the right use for it. For example streamers and people who work from home can appreciate the higher speeds.

It certainly is surprising how router technology is now evolving to the point that people need to upgrade their internet to fully take advantage of them. However, as Fiber internet and other innovations are quickly being adopted, Gigabit routers are becoming more popular by the day.

Hopefully, our roundup helped in finding the best Gigabit Router for your money.