ASUS and Noctua first teamed up to create a custom RTX 3070. But now they have released a new card which we see how it fairs with this ASUS Noctua RTX 3080 OC review. It aims to improve upon the most popular graphics card. With the promise of better and quieter cooling although at a much bigger size coming in at over four slots. The new card brings the Noctua aesthetics to the graphics card world. 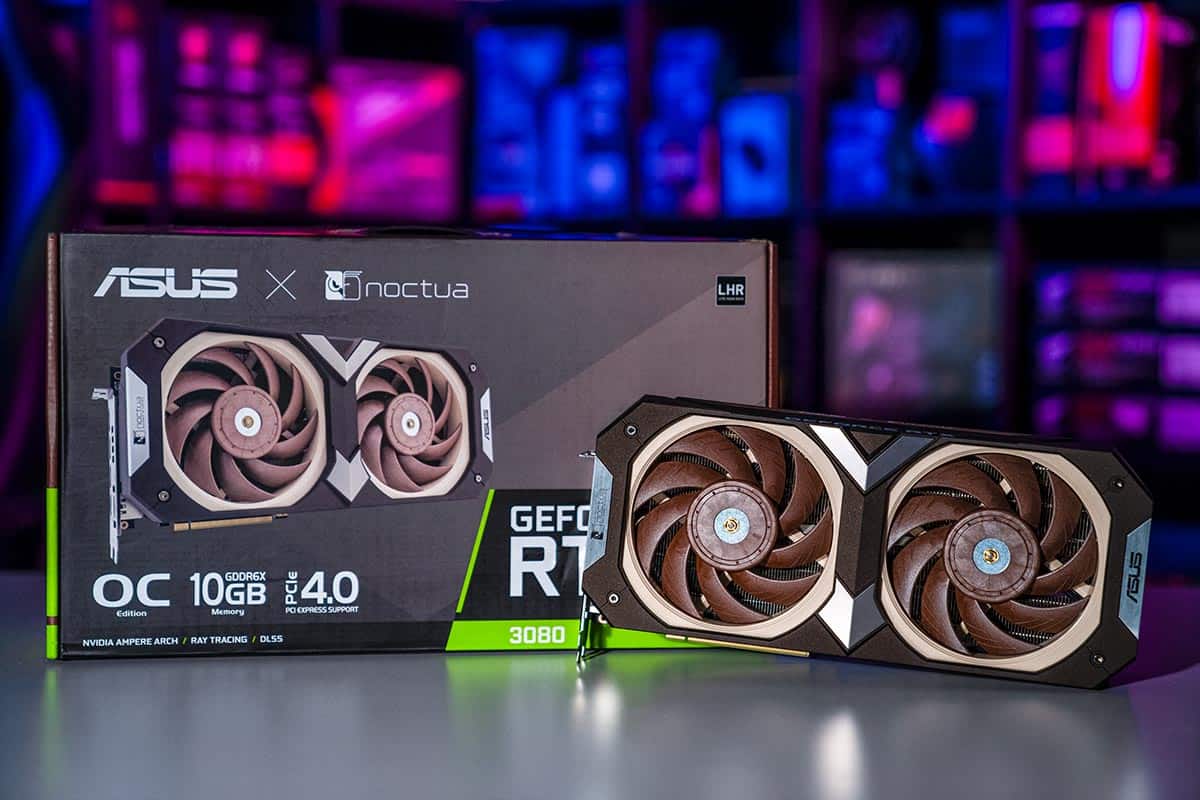 The Noctua version is based upon ASUS’ TUF model but improves upon the original design. With an enlarged copper baseplate to cover a wider area. Including the VRAM as well as the die itself for better performance overall by keeping temperatures under wraps. Along with a bigger heatsink for a greater thermal density.Which are then helped out by two Noctua NF-A12x25 fans instead of the stock three 92mm fans. The superior fans are more optimized for better airflow and static pressure characteristics. Which does give the card lower GPU and VRAM temperatures while running quieter than the original TUF. Promising an improvement of 4.5 dB, 3°C GPU, and 14­­°C in VRAM over the previous offering.

The build itself is sturdy and surprisingly nice looking. As with such a large heatsink and fans you’d expect a lot of bending and GPU sag. However, ASUS has done well to reinforce the card to prevent that from occurring. With a well-connected structure, it prevents any loose areas. With a strong backplate and IO shield, it also connects the furthest points together to create a solid build. Preventing bending over time can ruin the aesthetics of the graphics card in the long term.

Noctua is known for its unique color choices of beige and brown. Which it has also brought to the 3080 which the fans are. However, the design around the fans is a less polarizing more toned-down color choice. It uses a darker brown and silver to create an owl-looking design on the front side. With the spinning fans being a hypnotizing pair of eyes. Put together it creates a well-designed and thought-out graphics card.

The Noctua 3080 is based upon the 10GB version of the GPU. Which is the older version with 10 GB of GDDR6X memory. Across a 320-bit memory interface, it is clocked at 19 Gbps giving it a bandwidth of 760.3 GB/s. With the majority of the card specs kept the same.

It does offer an overclocked engine clock, with a boost clock of up to 1815 MHz. Which is what 8704 CUDA cores can potentially run at. It also has four maximum displays and five ports. Two of which are HDMI 2.1 and three DisplayPort 1.4a. It does only use two 8-pin power connectors with a recommended power supply of 850W.

The cooling solution utilized is based upon the ASUS TUF model. This increases the heatsink’s width to 120.50 mm, the height to 42.20 mm, and the depth to 94 mm. Along with an increased copper base plate, size to include the memory chips as well for improved thermals. Which is also supported by two NF-A12x25 120mm fans. For optimized airflow through the heatsink to dispel all the heat.

For pricing, ASUS has announced a retail price of $950. Although much higher than the original price of the 3080 of $699. However, the current pricing of the 3080 is much higher already, and it’s not too far off. If you can find it in stock anywhere. With using only finding it on Newegg for a much higher inflated price of $1,349.99.

We compared the use of the ASUS Noctua RTX 3080 vs an MSI Gaming X Trio RTX 3080. Looking in particular at the core temperatures the cards achieved, the frequency they ran at, and the fan speeds. Using benchmarks and stress testing we see how well the cards perform under the biggest pressure.

Our test bench is made up of:

From the results of the two cards, we see the same GPU clock utilization and power usage. This is from one minute before a 10-minute Furmark run and one minute after. Although not perfectly aligned it shows us the relative behaviors of the two.

The two cards have the same overclock on them so we do see the frequency between the two stay the same. With a steady rate of around 1500 MHz during the test and peaking to near 2000 MHz upon finishing.

Then we see the fan RPMs. With the Noctua, a much more aggressive response jumps to 1369 RPM, whilst the MSI jumps to around 800-900 RPM and ramps up after. Whilst the brown fans ramp down and average around 1100 RPM. With MSI peaking at 1366 RPM and averaging around that same speed.

We can also see the power draw of the two cards. Both peaked at 340 W, about 20 W higher than the TDP of the 3080, and the MSI GPU is capable of more power from more power connectors it uses.

Lastly, we see the temperature of the GPU and we see how well the Noctua fans perform to keep the temperature down. The GPU peaks at 60.1°C and with the fans kicking in, it drops to below 58°C. Whereas the MSI temperature keeps climbing even when the fans start spinning. Peaking out at 70.7°C after four minutes it then drops to around 69°C. With the ramp down taking much longer after stopping than the Noctua card.

With the lower RPM and bigger size, the fans run quietly. Although we do not have the means for sound comparison to truly compare their levels. Neither of the cards was particularly noisy. The Noctua option causes less turbulent air but you can hear the coil whine.

Either way, it is capable of keeping the GPU temperature much lower. With a better default fan curve better responding to the workload than the MSI card.

Overall the ASUS Noctua RTX 3080 is a great build of a graphics card. Giving you the iconic brown of full-size fans. Along with an owl-like design, it is a unique design with excellent cooling. Capable of great performance in the long term as well as pushing it in performance. It is a great choice for a card if you like the design and have the space to actually fit it in. Although it does come in at an inflated price that does come with the premium of the card. So if you have the means it can be the card for you. And we’re likely to see more from the collaboration further down the line.